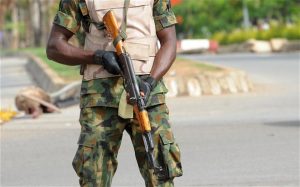 Twenty-four hours after the Nigerian Army suffered a major loss with the killing of Brigadier General Audu James, the military has recorded yet another tragedy.

Daily Trust had reported how a corporal said to be under alcoholic influence crushed the general to death inside a barracks in Lagos state.

While the dust over that incident was yet to settle, another soldier opened fire on his colleagues, killing one of them and a humanitarian worker.

A co-pilot of a UN helicopter sustained injuries in the incident, which occurred in Damboa Local Government Area of Borno.

According to the Assistant Director of Army Public Relations, Major Samson Zhakom, troop had to shoot him down to prevent more havoc.

Zhakom said the injured co-pilot has been stabilised, and that investigation has commenced into the regrettable incident.

“The theatre command Operation Hadin Kai regrets to inform the general public of a sad occurrence at one of our military base today. A soldier shot and killed a staff of one of the NGOs providing humanitarian support in the North East.”

“Same soldier also killed another soldier and injured the co-pilot of one of the UN helicopters. Own troops on the ground immediately neutralized the errant personnel.

“The injured co-pilot has been stabilized while the corpses of the deceased have been moved to the 7 Division Hospital. Detailed investigation into the incident and subsequent remedial actions have commenced into the highly regrettable incident.”

NaijaCover Is A Popular Blogger In Nigeria, Blogging Business Is The Language, NaijaCover Understand.