The fast rising Afrobeats Superstar, Snoweezy won under the Music and Entertainment category of the 2021 Oyo State Most Influential Brands and Personalities Award powered by Lewaj Africa.

The highly publicised event, which held on Sunday, January 30 to celebrate and appreciate the role of various influential Brands and Personalities in Oyo state who passed various criteria to emerge among the 100 most influential Personalities. 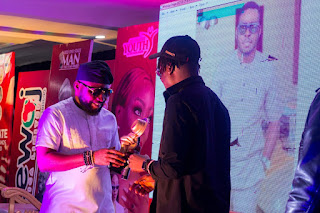 Taiwo Hassan Aderinoye, Popularly known as Snoweezy while receiving the distinguished awards at Jericho, Ibadan described how elated he was. In his appreciation speech, Snoweezy said, “I am highly grateful for been chosen among the 100 most influential Personalities in Oyo state, that means I and my brands works were not going unnoticed”

He continued, “this is a charge towards increasing our pace of development and motivation towards been a more bigger artiste in years to come”.